I just wanted to round up a few pieces of exciting news that have happened recently.

Firstly, Word Find was reviewed by Ewan Spence from All About Symbian here. It's really nice to have a game of mine featured and very useful to get feedback that's much more detailed than allowed in Ovi Store.

Secondly, Word Find was also reviewed and featured as the Ovi Daily App for the 19th of March here. I'm very proud to have an app featured in such a prominent way and looking at the stats, these two reviews have already led to an increase in downloads and sales of many of my apps and games and not just Word Find.

Thirdly, it seems that someone has released a cracked version of the full version of Grovr Folder Sizes. I take this as a compliment that someone decided it was a good enough app to put the effort into cracking it. Given the convinience of getting apps from the Ovi Store and the low price points of my apps, piracy is not something I am bothered by, as I don't believe it leads to many lost sales.
Posted by Matthew Grover at 14:31 No comments:


Posted by Matthew Grover at 13:44 No comments:

I'm pleased to announce that I have a new product in the Ovi Store: Grovr Folder Sizes.

Grovr Folder Sizes solves the problem of working out where all the space has gone on any of the drives on your phone. It does this by summing up the total size of all the files and subfolders inside a folder for all of your folders and then displays that information in a normal drive view as shown below. 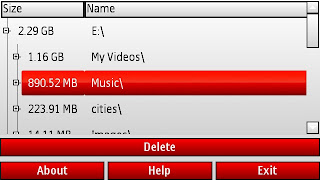 Folder Sizes also allows you to easily delete entire folders and files just by highlighting them and pressing the Delete button.

Just a quick post to say that I have now had over 100,000 downloads of my apps on Ovi Store. I'm very pleased with this as this has come with no advertising at all and my first app was only published just over 4 months ago. Hopefully the next 100,000 will come even quicker.
Posted by Matthew Grover at 19:56 No comments:

Here are the weekly download statistics for the week of the 26th February to the 4th March.

These figures are somewhat rough in that they are based on the estimated revenue from sales and also a rough calculation of the exchange rate. They do not reflect actual money that I have recieved into my bank account.
Posted by Matthew Grover at 14:28 No comments:

Matthew Grover
I'm Matt, a programmer based in Cardiff, Wales. This blog is a collection of my reviews of programming books and other thoughts on programming. I also used it to post my earnings and releases when I was an independent app developer for a year.